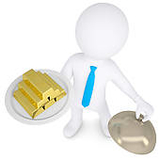 Mcx Commodity Bullion Trading had advised selling and later buying momentum in Bullion wherein we had anticipated gold commodity take support near the $1275 mark, while yesterday low was $1279. However by end of day Gold added marginal weight and currently is largely flat near the $1300 mark. While the conventional Dollar-Gold relation is not working currently wherein Gold added on account of ECB stimulus announcement; overall move continues to be in a big range. With UDSDX currently trading higher and equities too trading positive, intraday gains in the commodity may remain capped wherein we suggest traders to look for momentary trades in the commodity wherein which our calls would be purely dependent on Technical factors during the day. Gold was highly volatile yesterday; thanks to the ECB meeting while finally ended the day little changed at Comex to $1300, higher 0.5percentage on a day to day comparison. Gold commodity for Feb expiry at MCX too traded in a similar fashion with commodity adding 0.2percentage by closing to Rs 28035 per 10 Gms

Global Market Analysis: It was all about ECB meeting and comments from the ECB officials which drove good volatility in the markets across asset classes yesterday. Mario Drag committed to a quantitative easing program worth at least1 Trillion Euros to counter the threat of a deflationary which pushed Euro lower while US Dollar index splurged over a percent moving over the fresh multi year highs of 94.Euro currency slipped and currently trading at 1.1365 level, a sharp cut of over 2percentage last day. Economic Data: Man PMI numbers from Euro area and US watched

We had a Sell – Buy strategy for Silver as well which worked fine however for the day; mixed cues from equities, currencies and also base metals are keeping us on a cautionary note in silver commodity as well. We also advice, Selling the ratio on pullback while that should have worked well with traders initiating the strategy as Silver by end gained. For today, we have hold view in strategy too Silver continued to outperform with the commodity rising around 1.3percentage to $ 18.35 per ounce at Comex markets Silver MCX also closed higher though gains were less due to Rupee appreciation. Silver MCX added 0.4percentage to Rs 40080per Kg

EIA Inventory numbers showed stocks fell by 216 BCF in the US against expectations of a reading near 226 BCF and thus supporting the downside. On weather, while US CPC chart for 8-14days forecast still suggest cooling to expand, other weather forecasts have turned for largely warmer weather creating a mixed view over US climatic conditions in coming few days. We hold a cautious approach in the commodity today. Technically, NG NYMEX is hovering near important supports and break below the same could lead to huge fall in coming sessions. Natural Gas had a hell of a session wherein we had a moderately bullish bias as weather related cues supported though weaker inventory numbers pushed it down NG NYMEX contract for Feb expiry fell 4.6percentage to a $2.83 per MMBTU mark. NG Jan expiry at MCX too fell 4percentage to Rs 172 per MMBTU